We don’t play by the rules. Except when it comes to cocktail strainers. We’ve got three of the best cocktail strainers in the game. The Hawthorne Strainer, surprisingly not named after the street in Portland. The Heavy Julep Strainer and a classic Fine Mesh Strainer. But what’s the need for three different types of strainers? For some it’s a preference, for others it’s a science.

The Hawthorne Strainer is the most popular strainer for any professional or home bartender. It’s traditionally used for straining pulp and ice out of shaken cocktails. Shaken or stirred? It works well for both. The Bull in China version of the Hawthorne strainer is crafted with an extra dense coil to help strain all the bits out of your drink. Trust us, you won’t go back to the cheaper versions once you try ours.

This strainer is built to fit perfectly atop a shaker tin or mixing glass (we’ve got those too!). The history of this strainer? It was patented as a Hawthorne Strainer in 1894 and designed to “fit any glass” according to Tales of the Cocktail. It was actually created as an easier-to-clean version of the traditional Julep strainer and modeled after traditional Chinese tea strainers. And how did it get its name if not from the famous Portland neighborhood and street? It was named after a Boston bar called the Hawthorne Cafe, which sadly no longer exists. But the name lives on!

We think of the Hawthorne as a versatile strainer for every cocktail connoisseur.

The Heavy Julep Strainer is our take on the classic Julep strainer. As we discussed above, the Hawthorne was created as an update to the Julep strainer. It had its heyday in the 1800s then went out of style for a bit, but now it is finding its way back into bars everywhere. It’s a favorite among bartenders and is used when straining a cocktail into a mixing glass.

The Julep strainer has larger holes, so it’s best used for straining larger bits from your drink (mostly ice). According to Imbibe Magazine, the Julep was invented as ice became more readily available in the 1800s for use in bars when bartenders needed a tool to help strain the ice from their drinks. Why did they want to strain ice from their drinks? The history is murky, but Imbibe claims it could be related to beards...no one wants to get a beard full of ice, right? It became a popular and fashionable tool for bartenders to use when crafting cocktails.

It’s best used with a mixing glass for stirred cocktails. Our Heavy Julep Strainer makes it easy to handle and fits perfectly in our Bull in China Mixing Glass.

The Fine Mesh Strainer is used for the purpose of double straining your cocktails. It might sound extraneous, but it’s great for getting all the little bits of pulp or herbs or grit out of your cocktail for a smooth drinking experience. The Hawthorne strainer while incredibly versatile, it doesn’t always catch all the small stuff. And that’s where the fine mesh comes in.

Have you made a muddled cocktail with lots of fresh herbs or berries and you don’t want bits of seeds or grit in your cocktail? The mesh strainer can help get rid of all the little bits and grits for you. The fine mesh strainer can be held directly beneath the Hawthorne or Julep, or you can do a second strain through the mesh for a perfectly smooth drink.

A strainer is an essential tool in any bartender’s arsenal. Choose from one of the three or get all three and experiment with different types of drinks and textures. And at the end of the day, we strain our drinks to save the beard from an avalanche of ice. 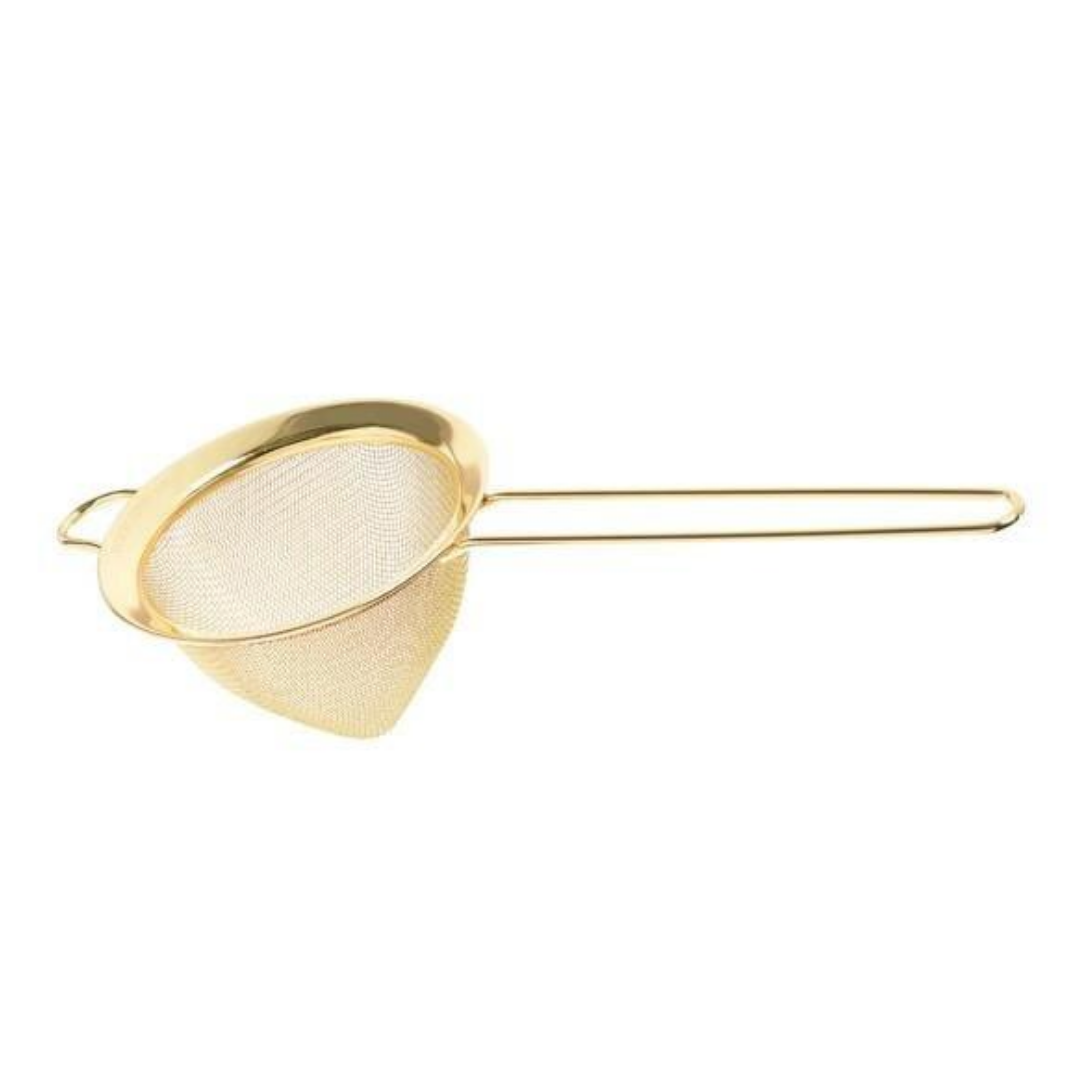